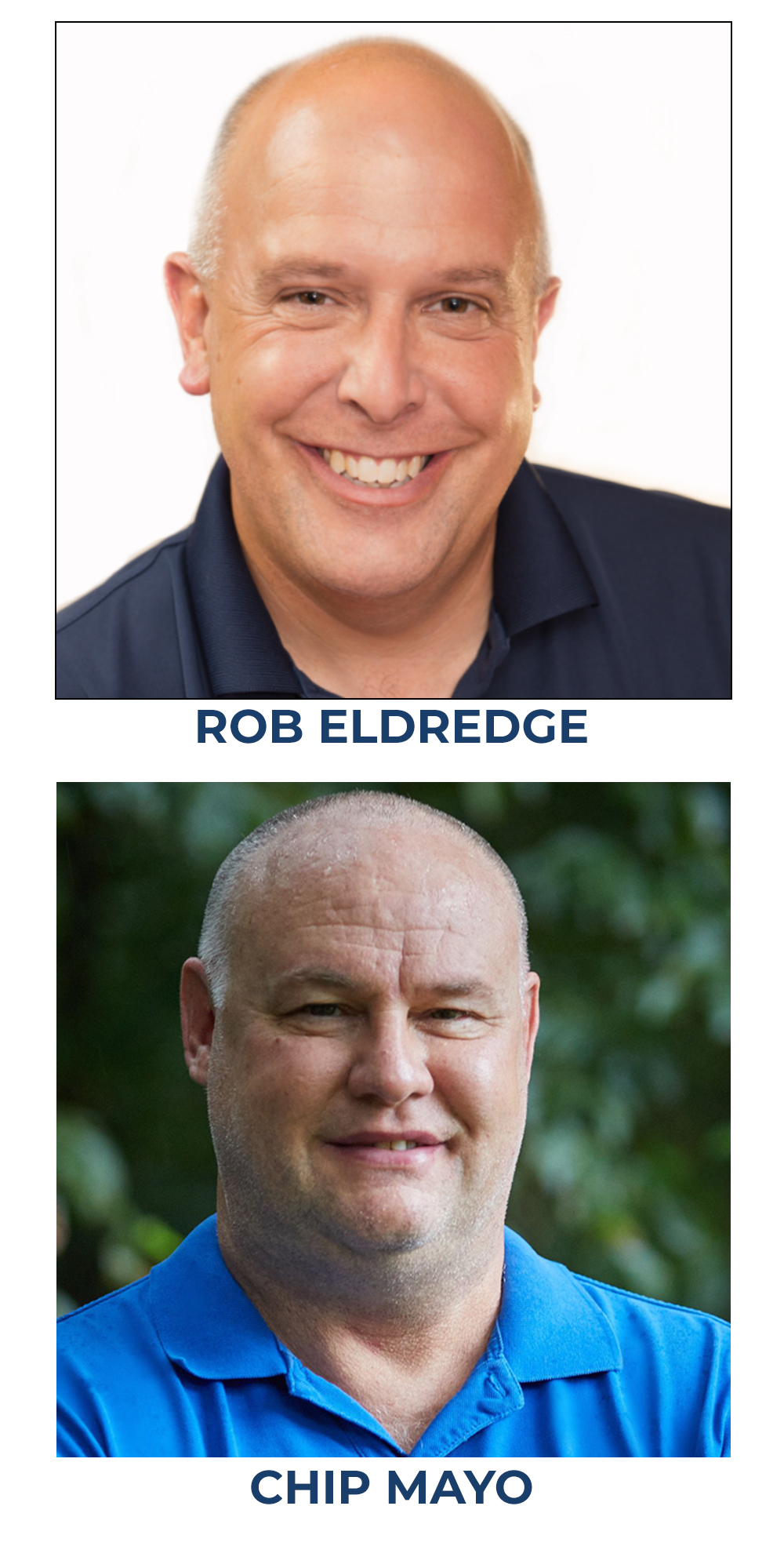 Every day of the week, on highways and local roads, trucks dominate as a mode of transportation.  Trucks pick up and deliver merchandise, as well as transport food, cars or equipment to a home or business.  Rob Eldredge and Chip Mayo’s story about ME3 Corporation will have you thinking a little differently about the people behind the wheel of those trucks and the company they represent.

Rob and Chip share a long history together in their professional lives.  Rob grew up in Chester County in the West Bradford area.  He worked in the family trucking business for 20 years through high school and college, and again after he served in the Marine Corps.  Rob traveled across the US driving a truck, going from one Sears Auto Center to another.  People ask him about all his travels, testing his memory of small towns in one state or another. Rob can almost always answer, “Yes, I was there. I serviced a Sears Auto Center in that town!”

Rob met Chip 21 years ago when Chip was hired into the family firm as a truck driver.  Chip was trained by Rob, who eventually invited him to “come inside” where Chip took on new roles as a dispatcher and driver recruiter enabling him to experience a broader scope of this business. Both believe strongly in family; family at home as well as the family they work with, day in and day out.

In 2013, Rob took a big step forward when he left the family business to work for a large trucking company with five times the number of employees and almost four times the revenues. There were many challenges to address including serious retention issues and a glass ceiling on income which negatively affected profit margins. Rob invited Chip to join him at this new company to develop a team and establish a new mission.  As a result, driver turnover was quickly reduced from 86% to 22% and broke through the glass ceiling.  In November of 2015 Rob and Chip left for another company to help them with the same issues. Unfortunately, a few months later, Rob lost his position at the company when there was an unexpected death in the leadership team.  Shortly after that, Chip was laid off.  It was time for a change.

The Path to Success

Rob and Chip were on a mission to buy a business, focused on something very different from what they had experienced in the past. With steadfast determination, this team evaluated many different kinds of businesses, convinced they had spent their last days in the trucking industry.  Most of the enterprises were unlike any of their previous employers. Rob and Chip found themselves studying beer distributers, dry cleaners, and even a company that disposed of cooking oil used in restaurant franchises.  Searching for this new chapter was much more difficult than they imagined!  Around this time, they learned about SCORE through business networking and connected with John Ralston, Mentor.

There was one firm that kept coming up on their radar as they continued their research.  No surprise, it was a trucking firm based in Honey Brook, Pennsylvania. The business came with a major key account servicing 33 customer locations, a 10-truck fleet and a team of experienced drivers. Because of their broad and deep expertise in the industry, John Ralston advised Rob and Chip to take a good look at this opportunity. They had a proven approach to build strong teams and develop positive customer relationships.

With John Ralston’s guidance, they investigated every angle of this organization and asked the tough questions. Ironically, a new company name had been established in August 2017 when they started their search process. By January 2018, Rob and Chip made the acquisition and ME3 Corporation was official: “M” for Mayo and “E3” for Eldredge with three e’s!

With a smile, Chip recalls how SCORE mentoring provided the structure and discipline to conduct a business evaluation, using thorough analysis and patience. John Ralston helped them select the business to buy. Together they analyzed the financials to develop a good sense of its value, prepared an offer and negotiated an agreement with the seller.  With SCORE’s guidance, they selected the legal and accounting professional team, decided on funding, and conducted the due diligence.  “Working with John kept us focused.” Chip says. “We learned to hit the reset button and moved forward!”

Rob reminisced on how much work was involved in studying an existing business.  There were critical questions:  Why is this company selling? What is hiding in the details? Is there a future here? They looked at the value of the equipment and the organization even though they were unable to speak with any of the employees prior to the final sale.  Rob shares, “John helped us to stop spending time on ‘small potatoes’ and understand the ‘big picture.’”

What is the SCORE Mentor’s perspective?  John Ralston compliments the ME3 Corporation owners for developing a good plan going into their search process and working their plan! John describes his role as one who “keeps prodding, asking questions, focusing on what needs to be done.”  Now that Rob and Chip have a stable and healthy business, the team of three meet once every six months to check in.  Next order of business:  finding additional customers!

The story began with Rob’s vision that he and Chip wanted for their new company.  They share a sincere belief in a strong team based on the care and concern of the “hands that take care of you,” in their own words.  They are committed to rewarding employees and recognizing them as the lifeline of a business like ME3 Corporation. “Employees have choices,” Rob reminded us. “Success for us is not just monetary. It is about the drivers and our customer. We communicated in person with our new employees immediately.  We shared our vision with them. We welcomed them to be a part of our new team. If, for some reason that wouldn’t work, then we offered to help them find a new job.” People matter to Rob and Chip. They want their employees to be proud to be a part of a successful team and to feel valued. Within two months of starting up, they met personally with their key account owner to gather customer feedback and set expectations.

ME3 Corporation is in the business of picking up food that cannot be sold and would otherwise be wasted. The drivers deliver it to a feed mill that turns it into feed for animals. Several employees who worked for the former owner (refers to the owner of the company they purchased – 10 drivers came along with sale of the business) were curious about this idea of a company vision and the principles concerning valued employees outlined in the new firm’s handbook.  Those who decided to stay at ME3 Corporation achieved success early on. The last full-time hire into the company was in August 2019. Today, the business has had no retention issues in an industry that commonly experiences 100% driver turnover annually.

Rob Eldredge and Chip Mayo are loving their roles at ME3 Corporation. They are most proud of taking care of their employees and of the relationships they have developed with their suppliers.  This is what separates their business today from all of their previous industry experiences. Their motto: People First, Always!

Rob shares his wisdom from years in the industry and his study of the power of teamwork:

Chip tells us to “use your resources.  Be open to listening to a stranger. We met John Ralston by networking with Anton, a SCORE Award Winner.” This made all the difference!